(G)I-DLE continues to raise the stakes before their UNIVERSE Music original, "Last Dance (Prod. GroovyRoom)," with teasers for its upcoming music video.

NCSoft and Klap released the official music video teasers, with Teaser A last April 26 and Teaser B on April 28, on its official social networking sites.

The first MV teaser, now already close to half a million views on YouTube, is a 24-second teaser that shows its members - each examining a mysterious trinket over an almost dark room, save for a soft light from a lampshade - as well as the forest setup with ghost-like figures.

The sequence weaves in and out with scenes showing the members Miyeon, Minnie, Soyeon, Yuqi, Soojin, and Shuhua getting into formation for the dance part of the music video.

The video abruptly ends, announcing the release of the new single. 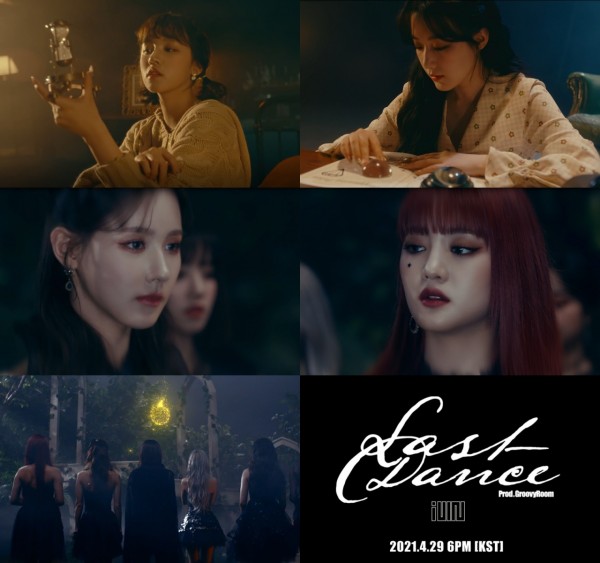 Two days later, it follows up with another MV teaser, this time starting with an image of the six (G)I-DLE members in white dresses that makes them radiant, even from afar.

Audiences are treated to the first sample of the dance routine in the latest UNIVERSE Music release, with the girls in black dresses that highlights both the mystery and maturity in the new concept.

Additionally, Neverland around the world - members of the (G)I-DLE official fandom - gets to see their favorite artists in close, albeit short, shots and appreciate their stunning visuals for the upcoming music video.

The two teaser videos are the recent part of promotional activities for "Last Dance (Prod. GroovyRoom)," following the prologue film "(G)I-DLE  - Prologue: The Witch Queen," released last April 23. In the featurette, members of (G)I-DLE are seen wandering through a cursed land, filled with ruins and mysterious creatures, in search of the titular Witch Queen. It presents the dark fantasy concept fans can expect once the official music video officially releases on the 29th.

"Last Dance (Prod. GroovyRoom)" by (G)I-DLE will mark the April 2021 release for UNIVERSE Music, an ongoing series of exclusive singles for the NCsoft and Klap fan interaction platform UNIVERSE. It follows IZ*ONE's "D-D-Dance" in January, Rain and Jo Sumi's "Guardians" in February, and Park Ji Hoon's "Call U Up (Feat. LeeHi)" in March.